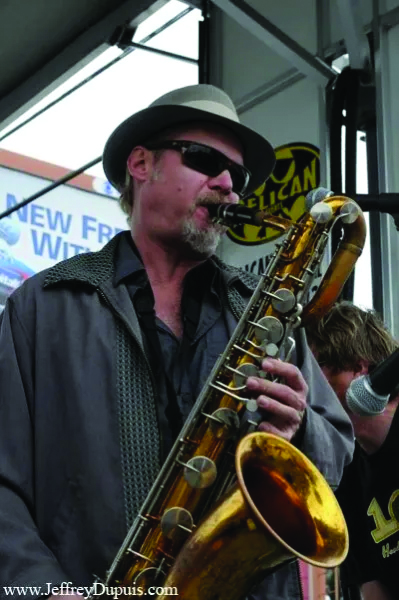 Jimmy Carpenter, saxophonist, singer–songwriter, and arranger, began his musical journey over 35 years ago. In the ‘80s, he toured the east coast with the renegade blues band, The Alka–Phonics, in the ’90s with the blues–rock band The Believers, with whom he learned about the music business. Over the years, Jimmy has toured internationally with Tinsley Ellis, Jimmy Thackery, Walter Wolfman Washington, Eric Lindell, and others. In 2012 Jimmy joined Mike Zito, his long–time friend and musical cohort, and recorded and toured as a member of Mike Zito and the Wheel. In addition to touring nationally & internationally, Jimmy has written, arranged and recorded the horns for many artists, and has gained a reputation as a master Blues, Rock-n-Roll and R&B saxophonist. Jimmy has also released three solo albums: Toiling in Obscurity, (2008); Walk Away (Vizztone 2014), and Jimmy Carpenter Plays the Blues (Vizztone 2017). After many years in New Orleans, he currently lives in Las Vegas with his partner in crime and musical inspiration, Ms. Carrie Stowers. In addition to leading his own band and playing with numerous others, he is the Musical Director for the Big Blues Bender, and leader of the Bender Brass, The Bender’s house band. He is the current president of the Las Vegas Blues Society, and in 2020 was nominated for a Blues Music Award, his 5th for Best Instrumentalist/Horn.